Submitting to a Corrupt Government 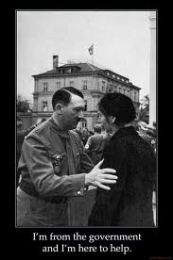 Imagine with me for a moment, living in a world where you are under a government that is most incredibly corrupt; one that cares not for its poor and oppressed. A society that hates Christians, and the very notion of Christianity. Imagine living in a nation where the vast majority of the ruling class, the ones who are in power are pagan; unconverted and ungodly men vying for power and control. Think about what it must be like, as a follower of Christ to be in the minority. Imagine living underneath an evil dictator who presents himself as God; who demands to be worshiped. Imagine being a citizen of a nation that imposes an unfair tax on its people, a place where injustice abounds, sexual immorality is rampant, and scandals occur on a regular basis.

Is this America that I am describing? Or is it ancient Rome? The same corrupt, over-taxing, abuse of authority, Roman government that the great apostle Paul told us to submit to? The Christian killing, light-on-fire, for fun kind of government; we are to submit to that?! As a matter of fact….yes. Maybe Paul doesn’t know how corrupt this government is. Or maybe he doesn’t know that we have so much worse, then all the people during the times of the Roman empire, with all the martyrs. We are an exception to the rule, we can rebel right? Maybe? I mean, it’s justified….(please note the sarcasm).

We as Christians ought to be the best citizens in this country. And yet, so often times we are not. We are so busy fighting for our supposed ‘rights’ (which we do not see very often in Scripture) that we find ourselves no longer being the ideal citizens. The idea of submission is particularly repugnant to us as Americans. We see it as inferior. We see obedience as shameful; we pride ourselves on our rebellious heritage; the Revolutionary War. When we are more concerned with our ‘rights’ and our ‘liberty’, justice and freedom, all good things, but when we are so concerned about these, that the Gospel, the great news of our Christ, becomes smaller, becomes diminished, tainted in the public view…we should grieve. My brothers, please, spend some time contemplating how we have failed to be the ideal citizens that we are called to be. How our rebellious attitudes and speech are not doing good but harm. It is true that we are not to obey when the matter is of sin. But technically guys, giving the government more money, is not a matter of sin. As much as I do not wish to, I must obey, for the sake of the obedience, for the sake of peace. More than that, for the sake of the gospel, for the sake of Christ. Remember, we are citizens of Zion first, not of America. We must show people this.

I write from the historic protestant worldview, that is, Reformed, specifically the conservatism within that tradition. That noble line extends from Edmund Burke to F.J. Stahl, Groen van Prinsterer to Abraham Kuyper, Herman Bavinck to H.R. Rookmaaker. END_OF_DOCUMENT_TOKEN_TO_BE_REPLACED
This entry was posted on Saturday, September 14th, 2013 at 4:30 pm and tagged with abuse, america, authority, Christ, Corruption, example, freedom, government, justice, liberty, obama, paul, rebellion, revolution, revolutionary war, rights, roman, rome, submission and posted in Biblical Perspective. You can follow any responses to this entry through the RSS 2.0 feed.
« It may seem ugly
Modern Enemies of Masculinity: Re-Blogged »

5 responses to “Submitting to a Corrupt Government”