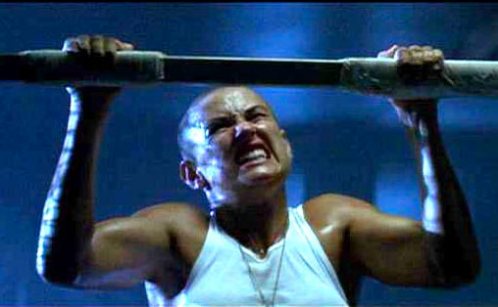 I am sure many of you are familiar with the movie G. I. Jane.  I am embarrassed to say, I used to love that movie. I always love a good story about someone who succeeds when the odds are stacked against them. I think everyone does. And a woman is most certainly going to have the odds stacked against her, trying to go Navy Seals. A woman is not a good as a man, she is not man’s equal. Not in this sense. She was not made to be his equal; not in regards to strength, combat, or manhood. Nor is man meant to be a woman’s equal in beauty, femininity, and womanhood. But so many people think that that would then make women inferior  to  man.

For some reason, we cannot accept that fact that men really can do some things better then a woman. And vice versa. And because I am pointing that out, I must be a male chauvinist. Unfortunately, these mentalities are in the reformed church. Unfortunately, there are many in the churches who think that G. I. Jane is a hero, and a wonderful model; as long as she submits to her husband and goes to church on Sunday.

I now see how the move is nothing but liberal feminist propaganda. G. I. Jane, Navy Seal extraordinaire, is a man, not a woman, regardless of how much she ‘submits’ to her husband. It does not matter if she puts on make-up or a dress when she is in the home, she is not a woman but a disgrace. Our society esteems her as a success; but she is a failure.  But she is a perversion as a woman. She is doing a man’s job in a man’s world, where a woman does not belong. And yet, we want to train women up, and put them in combat. The police force has been doing this for a while, trains women for combat, and sends them in to do what they should not be doing. If you don’t think it’s ‘combat’ then I ask you, what do you call it when people shoot people? Which results in death? By definition….that is combat. Why do we have so many so called ‘Christians’ who support gay marriage, a women’s supposed ‘right’ to kill her child and women going into combat? Anyone who supports women in the military and the police force is wrong; for combat is in the job description. In case no one noticed….

Now, maybe you disagree, in fact you probably do. If nothing else, I am sure you’re thinking that I am being too harsh. You are free to believe and espouse your beliefs about what you think a successful woman is compared to a failure; if you believe that a woman who is president or a Green Beret is a success, and that a stay-at-home mom is a failure, you are, unfortunately, allowed to have such a perverted and backwards belief. But rest assured, I will be espousing mine, which, I too, am allowed to both believe and share. A woman who is a man, that is, a Navy Seal, or a cop, regardless of how much she obeys her husband….is a failure as a woman, for she is a man, not a woman. I will never see it any other way. Men are no longer men, because women, are no longer women. I pray that we as  a country repent of this horror.

Picture taken without permission from: